Elephant have thrived for 50 million years in the forests and grasslands of Africa. Of the few million elephant in Africa not many decades ago, only about 480,000 still survive. However these iconic creatures could be lost in little more than the next decade or two due to a poaching bloodbath. We can hardly afford to allow a man-made extinction to be the end of this iconic species..

An elephant is being killed approximately every 15 minutes in Africa to supply an insatiable and unsustainable demand for ivory. Inhumane and barbaric methods are used to remove the tusks from the stricken animals, often by chopping the tusks out of the head before its life blood has drained and the animal is completely dead. Sounds terrible, but this is the reality.

A world without elephant is hard to comprehend, but is a real possibility. Against a sub-machine gun, or a poacher armed with poisoned spears, these gentle giants stand little chance of survival. In the past year it is estimated that between 35,000 and 40,000 elephant were slaughtered despite a ban on ivory. Within 24 hours, the tusks find their way out of the African continent borders on their way to countries such as China and Taiwan. In many cases, London acts as the hub for the illegal trade of body parts of endangered species. It is a known fact that, the funds derived from the sale of the ivory is often used for the purchase of sophisticated arms which is used by terrorists and rebels in their fighting in African countries. In countries such as Chad, Gabon, Tanzania, Congo, Mali and other African countries the poaching has reached disastrous and uncontrollable levels. In Zimbabwe, more than 300 elephant died as a result of watering holes poisoned by poachers. This poisoned water also resulted in the deaths of numerous other species such as lion, antelope and other animals. If the present level of poaching persists, or increases as we suspect it will, it does not require a mathematical genius to calculate just how many years it will take to wipe out the present African elephant population.

Our problem in South Africa is increasing by the day, simply because, as the elephant population in north and central Africa are being wiped out, the poachers are moving south and it is expected that our own country will be targeted starting as early as during the current year 2014. We in South Africa are duly privileged to still be able to view our elephant in their natural habitat, as this may not apply to the children of the younger generation.

From the pen of Bob Preller. www.silentgiants.co.za

A major problem has existed and further escalated in recent years between elephant and humans, better known as human elephant conflict (HEC) mostly due to the increase in human population and the encroachment by humans into areas historically roamed by elephant without the interference of humans. I have long considered various ways of separating the two species in such a way that humans can continue with their daily activities, and elephant can continue with what elephant normally do, without the two necessarily meeting, or creating conflict situations. It is a fact that elephant move into areas where humans have planted crops, and destroy the crops, and are known to flatten villages. The last fact is probably due to the hate which is slowly building up in the elephant because of the daily slaughter of elephant by poachers for their ivory.

Researchers and scientists found that planting chili around their crops was a deterrent, but elephant soon found ways of circumventing the chilies. Dr Lucy King did research on bees, and the hanging of bee hives in tandem, around crops proved to be quite effective. The reason being that elephant are terrified of bees, as their sting to the soft areas of the elephant’s trunk, back of the ears, and soft skin around the eyes is extremely painful. However, the question is whether there was any more effective way to help stop HEC. 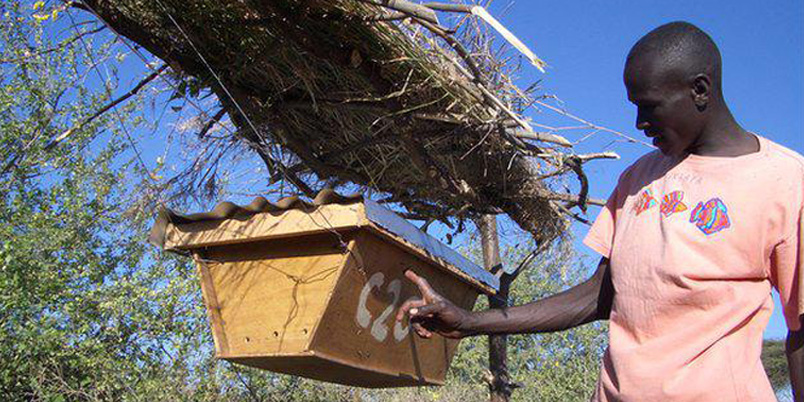 I commenced with ultra – sonic research on elephant three years ago, and in conjunction with the CSIR in Pretoria, developed a unit built on a pole with transponders fixed to the pole, facing in various directions. The pole was a steel pole, two meters high fixed to a steel platform one meter in diameter. The settings of ultra – sonic waves produced, were tested from 1Hz to 35 Khz with elephant that were educated and trained and used for interaction and research. These elephant were used, simply because we could be in close contact with the elephant.. This made the research project a lot easier in the early stages? The results were disappointing, as it was clear the elephant were aware of the ultra – sonic waves, but this did not deter them from moving into unwanted or prohibited areas. 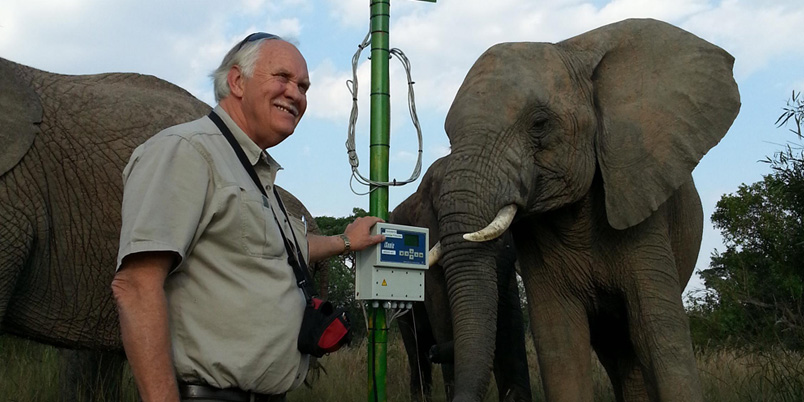 This was when I decided to move into infra – sonic and seismic waves.
Elephant communicate by means of infra – sonic waves which in many cases cannot be detected by the human ear.
Considerable research has been conducted by scientists from Universities from other countries, recording rumble’s etc. by way of seismic waves, but to my knowledge never used as a deterrent to keep elephant out of “no-go” areas.
So why not speak to elephant in their own language, which they can understand. !!!
I made contact with and was referred to various institutions and universities who may be able to assist, and finally met up with Wits University, department of Geosciences.
Seismologists, Dr Susan Webb and Dr Musi Mansi of the Dept of Geosciences found the project intriguing and extremely interesting and decided to buy into the project. We are in the process of recording the seismic waves created by the rumbles and trumpeting of elephant and lion roars (which are known to create discomfort to elephant). Elephant are capable of picking up seismic waves over vast distances, and react accordingly.
Our research involves burying a very delicate seismic measuring device in the ground, as used to record earth tremors, and earthquakes, and connecting it with twenty or thirty of what are known as geophones. 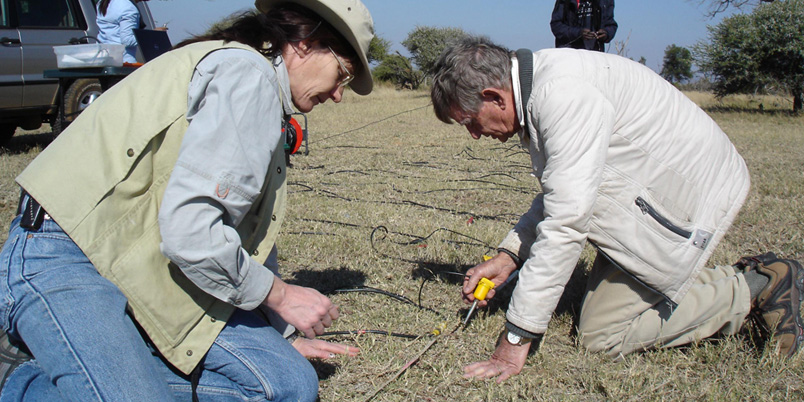 These geophones are set out in a straight line approximately one meter apart and also buried in the ground, primarily to protect the measuring instruments from picking up unwanted sound waves, such as wind, etc. The elephant are then required to walk, trumpet or rumble at different distances from the geophones, and the waves created are recorded, and once analyzed will be used in the seismic pillars. The analysis of these seismic waves is a precise science and is a time consuming business.
Then we need to build the working unit into a pillar.
The next step after perfecting and crossing this mountain will be to test the seismic pillar on wild elephant and record their responses. 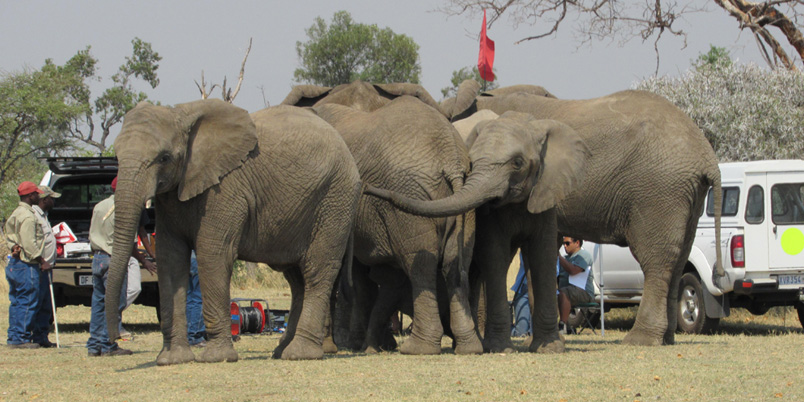 I hope eventually to be able to build a square pillar, not more than 500 mm square, and approximately two meters high, activated by solar energy, which will house the electronics required to produce seismic waves. These waves will be sent into the ground as an elephant approaches, the closer he gets, the more intense the waves, and will be picked up and recognized by approaching elephant, clearly giving them the message to back off.. These pillars can be placed in tandem approximately 20 meters apart in the form of a virtual fence, in areas where crops or villages exist. or adjacent to water pumps, pipes etc Should be wonderful to use in Africa, where HEC is rife..
BUT, as in all research projects, it consists of a thousand kilometer journey, of which we have barely covered the first hundred kilo’s.
Hopefully, when we attain our objective, the HEC problem will be addressed from a different perspective, and can be of assistance in saving both the lives of elephant and humans. 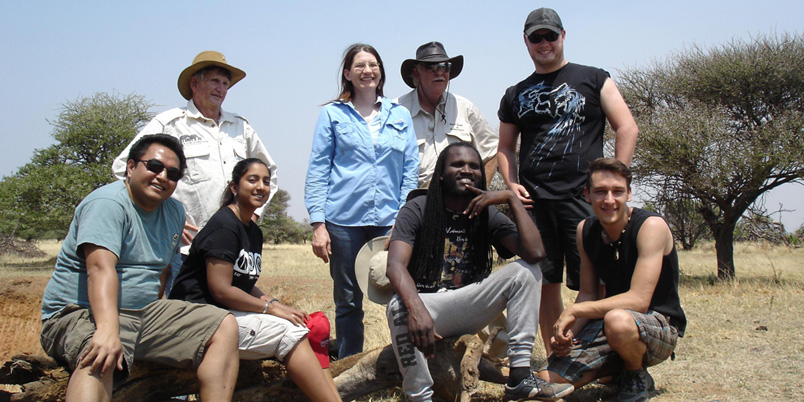 Not sure what tour is right for you? Contact us for some guided advice.